No Top of the Pops records are known specifically from Belgium, but the country is nonetheless worthy of special mention. The Belgian public seemed to have a real affinity for the Europe Editions, which were of course on sale there.

The albums regularly reached the top end of the Belgian LP charts, as the listings below (from Billboard magazine, 1972) show:
NB - where the charts gives the artist credit as "DA" or "Div Art", this translates simply as "Various Artists". The "label" is given as Discobel, who were the Belgian distributor.

The fact that these records were so effectively marketed in Belgium is due largely to Discobel's Managing Director, Werner Huys, who was behind the distribution company's success. Discobel awarded the London arm of Pickwick its own gold discs - although according to the sleeve notes on Europe Edition Volume 2, Volume 1 earned Gold Disc status in two European countries:

Here are a couple more Billboard reports from 1972, mentioning Gold Discs from Belgium:
Pictured below is a news cutting which shows some Gold Discs being awarded to various industry figures connected with the series, including Monty Lewis, President of Pickwick UK and Discobel's MD, Werner Huys. These awards are for sales of Europe Edition 1: 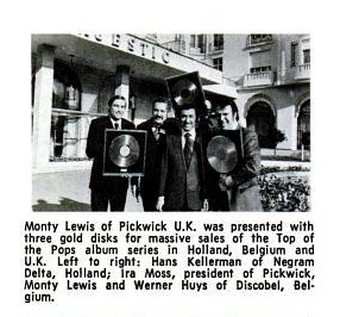 We have been fortunate to obtain one of these elusive Gold Discs. It is pictured below, along with a close-up of the plate at the bottom.

The disc itself is not made from an actual record. It is a gold-covered stamper (which are used in the manufacturing process - they literally stamp the record into the soft vinyl). Moreover, it's not a Top of the Pops stamper at all. The run-out area shows the matrix number MFP 5047, so this is a stamper used to press Maurice Chevalier's self-titled MFP album of 1969! The Top of the Pops label has simply been glued on. 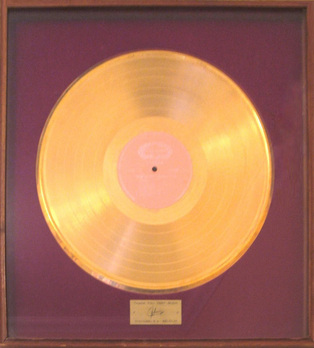 Below are a few more photos of these gold disc awards.