Comments: This album was a latter-day incarnation of Top of the Poppers Sing & Play The Beatles' Golden Hits - but with three extra tracks, afforded by the CD's longer playing time. The original LP contents are supplemented by: 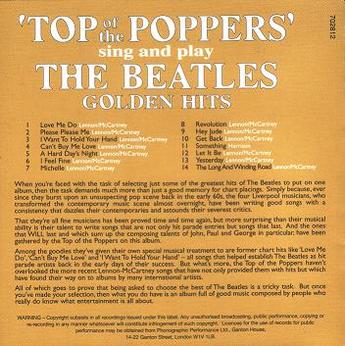 The enduring popularity of these Beatles cover versions, aready released on at least four UK LP editions and two cassette editions (as well as an 8-track cartridge), ensured that this CD would also be re-issued. The second edition came out on the Exceed label, and the disc itself was red for the re-press, as opposed to blue on the original CD: