Like its Lebanese predecessor, this single was issued on the Empire label, and has a specific album associated with it: Both "Sacramento" and "Meet Me on the Corner" are taken from the UK Volume 23, which was also issued there. (This dates it to early 1972, although the label doesn't give a year.)

The catalogue number, EM 107, is 5 ahead of the previous single sequentially, throwing up the question of which releases filled the gap. It is quite possible some are Top of the Pops spin-offs. Further research will confirm this.

This copy was purchased from a dealer inside a company sleeve (see photo below), and it is assumed this is the original. It sheds light on the Empire label, which appears to be an imprint of Societe Libanaise Du Disque (SLD), a record company based in Beirut. Interestingly, the small print is in French, a reminder of Lebanon's history, the country having been under French rule between the wars.

This particular copy has another interesting feature - a red sticker indicating that at some point in its past, the record was handled by a dealer in Abidjan, a large city in another former French colony - Ivory Coast! 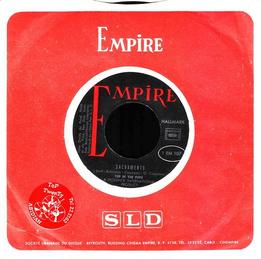