This release is an edition of Top of the Poppers Sing & Play The Beatles Golden Hits. It is known on cassette only at present, although it is feasible that a vinyl edition exists. It was released on the Max label, part of Metronome Records of Zurich, Switzerland.

There are several points of interest. The title has been substantially abbreviated, so that there is no mention of the Poppers anywhere (although Pickwick are credited on the inside). Also, the track order has been shuffled around, even when compared to the UK cassette, so that it starts with "Get Back".

Helpfully, though possibly for legal reasons, it is made clear on the packaging that these are cover versions, and not Fab Four originals. Indeed the spine makes the phrase "Cover Version" look almost as if it's part of the album title!

There is one issue to confirm: the vintage of this release. The cassette shell is formed in black plastic, with the two halves of the shell welded together rather than screwed together. This indicates late 1970s/early 1980s. And the the styling of the cover - a photo of the Rolls-Royce figurine "Spirit of Ecstacy" - is also of a style more suggestive of the 1980s than the early 1970s. As for the Dolby noise reduction system, this became standard in the late 1970s, and is a good indicator of age - we'd cautiously pin this tape to around 1980, give or take a couple of years, although this is only guess work. 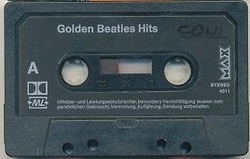 * Back to Switzerland page *