Other releases containing Top of the Pops tracks

Each of the albums below is a non-Top of the Pops release on which one or more songs from the series appears.

Top of the Pops Volume 70 onwards was recorded externally by Coombe Music, and so these later tracks often appear elsewhere without any involvement from the Top of the Pops team. These are outlined separately - and only briefly - below (see bottom of page).

Coombe Music and Parade of Pops

Bruce Baxter left the Top of the Pops in 1978, and thereafter Pickwick opted to start buying in recordings to keep the series going. The source of tracks from Volume 70 onwards (and Best of Top of the Pops 1979 onwards) was Coombe Music.

Of course Coombe were at liberty to sell their tracks any way they saw fit, and they were simultaneously supplying them to several small labels for a range of budget LPs and cassettes. We do not have space here to dwell on Coombe Music, but of chief interest is one regular hits series they were also supplying - Parade of Pops on the Chevron label. (This was a late successor to the earlier Parade of Pops series on the Windmill label, one volume of which features above.)

Some sample covers from the series are shown below:

Related to Parade of Pops was another, short-lived series called Solid Gold. There were only three editions, but again liberal overlaps with Top of the Pops (and Parade of Pops). The LP covers are shown here:

All song titles found on both Solid Gold and Top of the Pops are the same recordings ("The Land of Make Believe" has an alternative vocal over the same backing  track).

In addition to these, there are a few later Chevron cassettes which contain the same recordings as surfaced on Best of Top of the Pops 1984 (see that page for details).

Details on which tracks are shared can be found on the relevant Top of the Pops album pages, from Volume 70/Best of 1979 onwards.

This is a triple-LP box set, and one of several issued by Telstar in the 1980s (see also 1984 Hit Classics, above). It contains cover versions of dance hits, and includes a good number of Coombe Music recordings. Thus, there are 15 tracks here which also feature on Top of the Pops, between Volume 70 and Volume 91. (There are also two songs which featured on Top of the Pops records before they started buying in tracks from Coombe - "I Feel Love" and "Night Fever" - so these are different versions .) 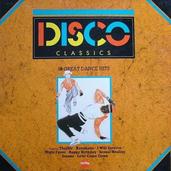