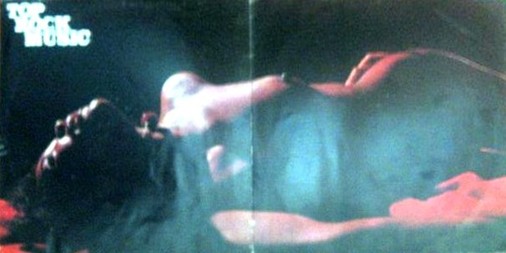 The album above is a compilation unique to Argentina, and is called "Top Rock Music". It was released on the TK Records label, apparently in partnership with Hallmark, who have their logo in the corner of the sleeve.

The cover gives each song title in both Spanish and English, and so we have reproduced both above. The sleeve also says the LP is "Presented by Peter Exs", although we do not know who he is, or what his input is here.

The album was released in 1975 and according to the sleeve, contains 13 tracks - with "If" listed twice. Among them is a cover of the disco hit, "7-6-5-4-3-2-1 (Blow Your Whistle)" which had originally been a hit for the Gary Toms Empire, although we've no idea where this version comes from.

Despite being a single album, the sleeve is gatefold, and above is a reproduction of the image on the inside, which shows a topless shot of the cover model.