Comments: So popular were T Rex that the team had already recorded all of their hits bar the recent “The Groover”, done especially for this LP.

For some reason, this LP was maufactured in Holland (just the record, apparently - not the sleeve). We have seen rare rubber-stamped copies confirming this... 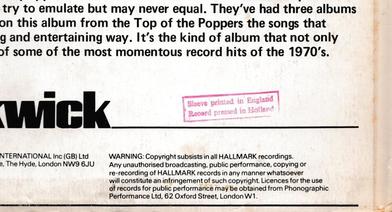