The date of this single is not known for sure, but it might well be New Zealand's first Top of the Pops venture. The A side, "Grandad", is sourced from Volume 15 whilst the B side, the generation-skipping "Two Little Boys" dates back to Volume 9. Courtesy of "Grandad", it must have been issued some time after January 1971.

However the matter is complicated by the fact that both tracks appeared together on the first Top of the Tots LP in Britain and it is possible that the single was a trailer for an as-yet undiscovered New Zealand edition. The Tots LP was issued at the end of 1971, and we know that Tots Volume 2 was also issued there.

The record itself is pressed in mono, and the label betrays New Zealand's colonial days with the name Sambo and a gross caricature of a Maori child. According to the back cover, the label is distributed by Hoghton Hughes of Christchurch, as were the main New Zealand Maestro LPs, hinting at a link. Also on the back we see a list of other Sambo singles issued to date, none of which look like Top of the Poppers spin-offs.

The record label shows the publisher credits as "Allans" and "Wallaby" respectively, which must be the New Zealand publishers as they differ from the known UK inscriptions.

We like the cover art, but it's too dark to see cleary - so we have restored it to its original state (below). It shows Grandad and, erm, two little boys. Clever stuff, eh? 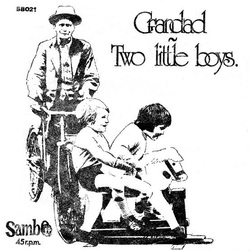